Chat
The World’s Top Cities to Explore Under Your own Steam, Revealed

The World’s Top Cities to Explore Under Your own Steam, Revealed

COVID-19 has drastically changed our travel habits in just a matter of weeks. Walking and cycling has increased in cities around the world, as people enjoy their daily exercise or take essential journeys they might otherwise have made by public transport.

According to the Department for Transport, Cycle-to-work schemes have increased by as much as 200% during the coronavirus lockdown, while cities have seen a 40% decrease in cars on the roads as more commuters work from home. Major commuting cities like London and Paris have developed plans to enable more residents to walk and cycle, with new cycle lanes and cycle-to-work schemes to help reduce the impact of pollution post-lockdown.

Paris has introduced 650 kilometers of emergency cycleways for the use of key workers and commuters in preparation for the easing of lockdown restrictions in France. Following unprecedented levels of walking and cycling across London during the pandemic, the UK government have actioned a plan to provide wider pavements, safer junctions, pop-up cycle lanes and cycle and bus-only corridors.

While scooting from landmark to monument via train, tram or taxi might be a quicker way of seeing a new city, there’s something to be said about exploring entirely under your own steam. From wandering up and down the streets of New York to cycling through the bustling city of Paris, you can easily see many of the world’s best destinations on foot or bike.

In 2019, Euromonitor released a report listing the capital cities around the world that had the most international visitors. We took the top 28 cities and scored them based on a weighted ranking that takes 12 factors* into account, to reveal the best cities to explore on foot or bike.

If you’re ready to ditch public transport and exercise those leg muscles, read on…

The 10 Most Walkable Capital Cities around The World

There’s nothing like the freedom and spontaneity of exploring a city entirely on foot. By ditching public transport and strolling along the streets you can take in the sights and discover all the hidden gems along the way, rather than whizzing past in a train, tram or car.

Out of a possible score of 60, the weighting takes 6 factors into account to reveal the capital cities with the highest number of walking infrastructures:

Grab your most comfortable pair of shoes, and check out the 10 most walkable cities around the world! 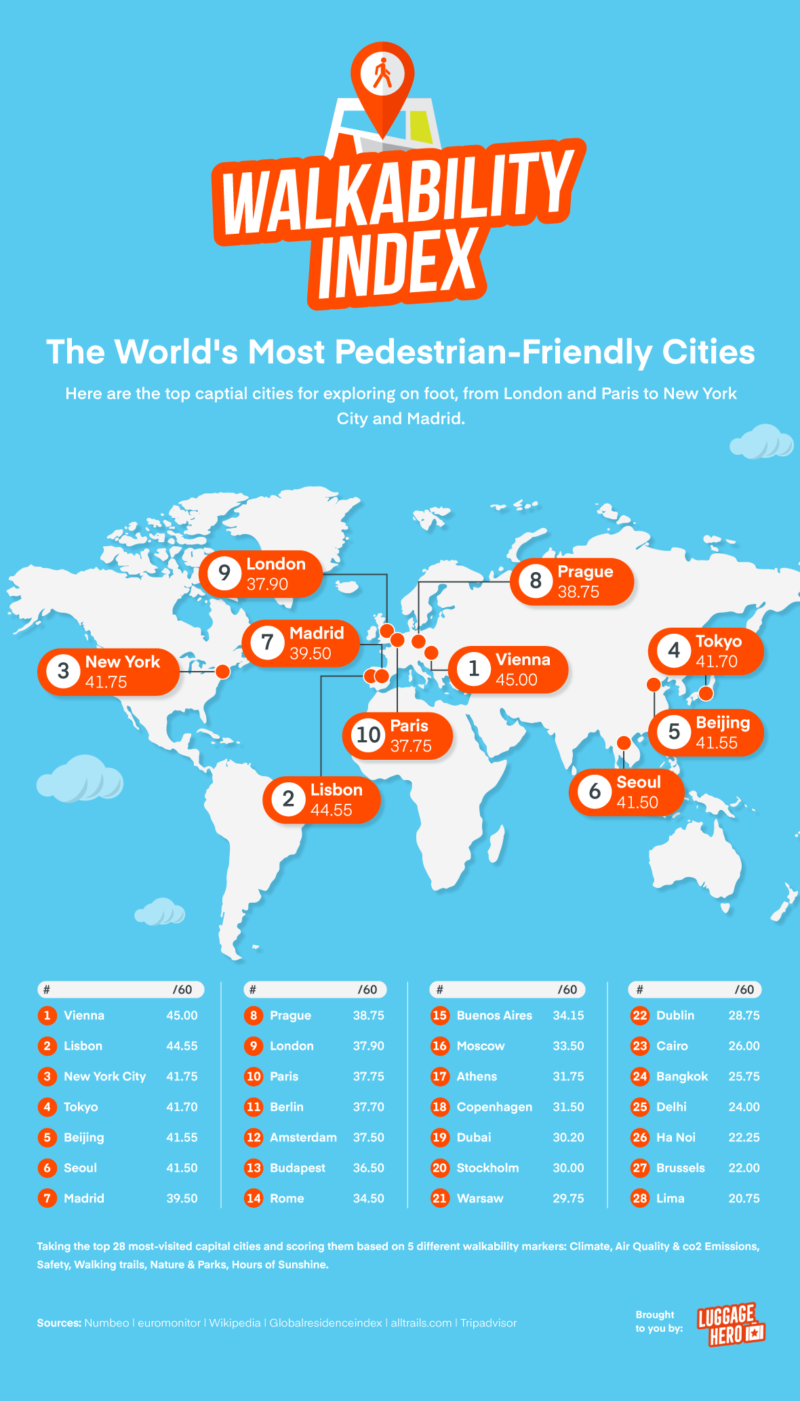 Ever wanted to arrive in a city and rely on nothing more than your own two feet to get from A to B? Vienna topped the charts as the most pedestrian-friendly capital city, making it the ideal city break location to explore solely on foot. Lisbon ranked the second-highest for walking infrastructure, while New York City took third place.

In the midst of the world’s busiest cities, nature attractions offer a sense of peace and relaxation. In fact, our COVID-19 Travel Sentiment Monitor has revealed that 35% of us are planning a nature focused trip this year. But with so many options, where should you go if you’re looking for a nature-filled experience? Out of the 28 cities included in the study, Tokyo had the highest number of Nature & Parks with a total number of 652. London landed in second place with 277 Nature & Parks dotted across the city, followed by Beijing.

Lima and Lisbon scored highly on the climate ranking, while the safest city for walkers was revealed as Dubai (which didn’t make the overall top 10).

Whether your goal is to reduce your carbon footprint, cut down on gas costs, get fit or avoid public transport, one of the best ways of exploring a new city is on two wheels.

From the culture-filled city of Amsterdam to the ultramodern architecture of Dubai, we have ranked 28 of the most visited capital cities around the world based on cycling factors.

Out of a possible score of 60, the weighting takes 6 factors into account to reveal the capital cities with the highest number of cycling infrastructures:

If you’re planning a two-wheeled adventure, you’ll be spoilt for choice with these top capital cities that go the extra mile to cater to cyclists’ needs. 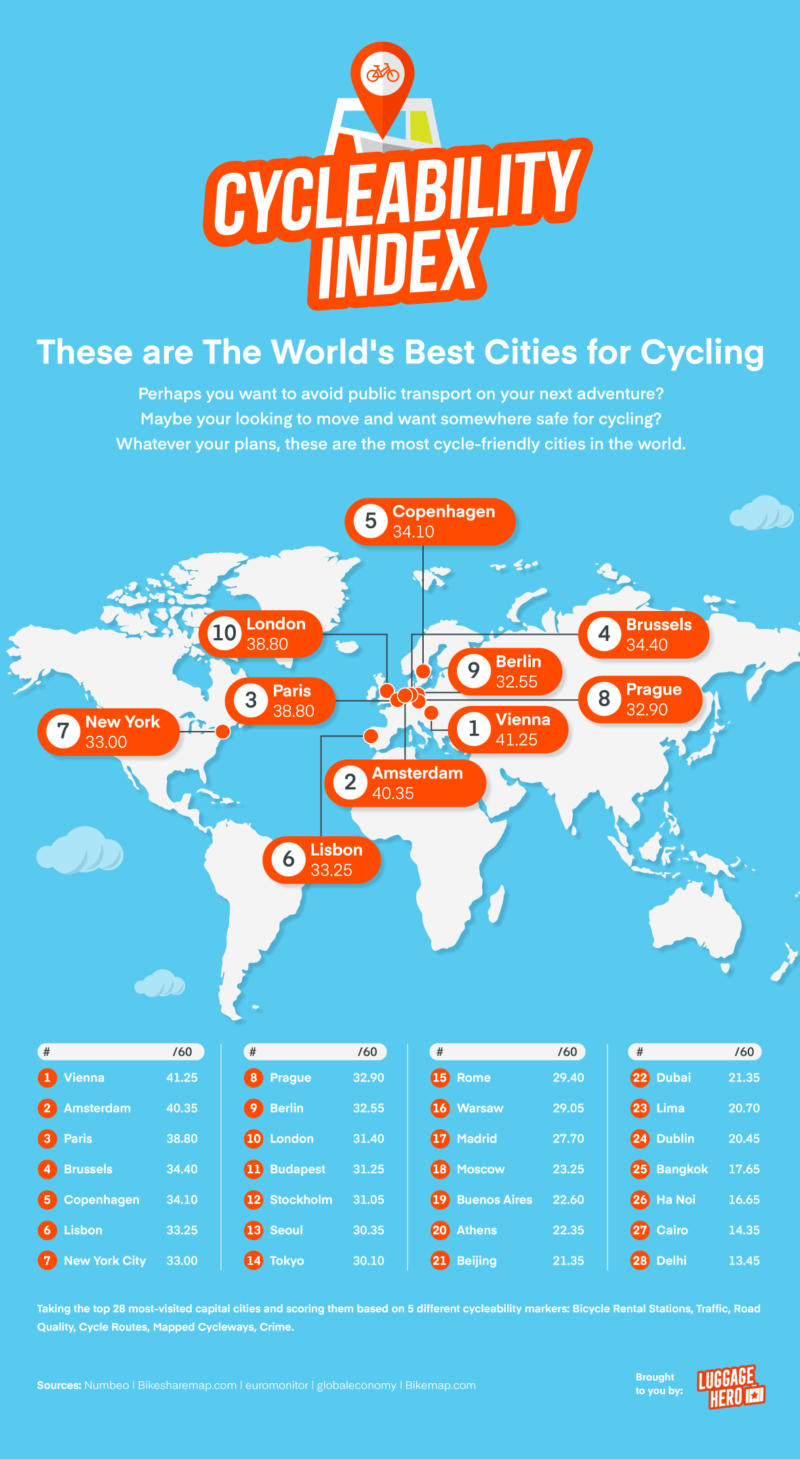 best cities to cycle. Or best for bikers.

Seven of the ten most bike-friendly cities are located in Europe, be it the bike-sharing programs, cycling safety or mapped routes, the continent is renowned as the birthplace of bicycle urbanism.

Vienna scored top marks for its bike-friendly credentials, having the highest number of mapped cycle routes out of the 28 cities included in the study. The Austrian capital city has 22,678 recorded cycle routes with over 2,119,676 km of mapped cycleways, that’s more than double the amount available in Amsterdam. But, if you’re looking for a smoother journey, then Dubai has the best road quality with a ranking of 6.60, that’s almost double the ranking of Vietnamese capital city Ha Noi (3.40).

Famous for culture, coffee shops, canals and architecture, the Dutch city of Amsterdam is also great for urban cycling, with 80% of residents owning at least one bike! The ‘Bicycling Capital of Europe’ ranked second place, scoring 40.35 out of the possible 60 on the Bikeability Index. With a low traffic index (100) and a high-quality road score (6.40), cycling in Amsterdam is the most authentic way for any visitor to see the city.

In Denmark, bicycling is one of the primary forms of transportation, residents cycle for pleasure, commuting, transport of goods and family travel. But surprisingly, Copenhagen landed in the fifth spot with a score of 34.10 out of the possible 60. The Danish capital is renowned for cycling, with 62% of residents commuting to work or school by bike rather than a car, an increase from 52% in 2015.

All over the world, people are rediscovering the benefits of cycling. Cities are responding by improving their cycling infrastructure to enhance the safety of cyclists and increase the number of potential users. Seoul, South Korea had the highest number of recorded Bicycle rental stations with 2,032 located across the city, costing 66 pence (1,000 won) to rent a bicycle for 24 hours. Paris had the second-highest number of bicycle rental stations, with a total of 1,370 dotted around the French capital.

While there are lots of benefits to cycling, getting peddling in a busy city can be a daunting prospect. But with low traffic rates, your overall experience will feel more safe. Vienna, Austria is the capital city with the best traffic flow for urban cycling, with a score of 79. Copenhagen ranked the second-highest, while Amsterdam took third place. At the opposite end of the scale, Delhi India ranked the worst city for traffic with a score of 284 followed by Cairo and Lima.

The World’s Top Cities to Explore Under Your own Steam

Here, we present the world’s best cities for walking & cycling, where the higher the total, the better the results. Click each column to filter the table for each of the different markers. 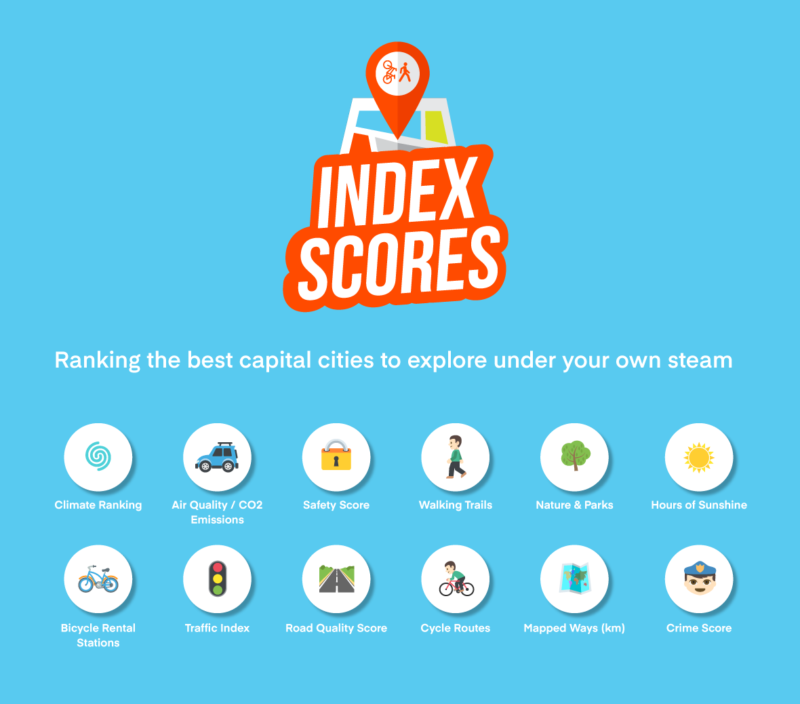 If you’re planning your next trip, whether that’s this year or next, don’t forget that LuggageHero is here to help make your trip as smooth as possible. Ensure you can experience your city break on foot or two wheels without your bags dragging you down.

LuggageHero analysed data from 28 of the world’s most visited capital cities from the Euromonitor 2019 report and analysed twelve different data sets that related to the infrastructure of each city and their suitability for walking and cycling.

Each city could score a maximum of 10 points for each element, and we used a weighted ranking system to achieve the final score out of 120.