Christmas is a time of the year when families gather and spend time together. Members of a family are willing to travel from every corner of the country or world just to spend those well-deserved holidays with their loved ones. However, there is always a risk coming hand in hand with traveling and that is your luggage and its likelihood to get damaged, mishandled, or in the worst-case scenario lost. This is particularly unpleasant if you are carrying your Christmas present in it!

We listed airlines that are statistically most likely to mishandle or lose your baggage. We have collected data from three years (2017-2019) official reports of the U.S. Department of Transportation. You can find reports for 2017, 2018, and 2019. Department of Transportation baggage reports come from passenger reports of mishandled baggage, which includes lost, delayed, damaged, or pilfered luggage.

How did the airlines score

These numbers are calculated as the rate of mishandled luggage reports per 1000 passengers. The rate is based on the total number of reports each airline received from passengers concerning lost, damaged, or delayed luggage.

The data from December 2017 show these findings: JetBlue Airways was the airline least likely to mishandle your luggage for December 2017. With the rate of only 1,77 pieces of luggage per 1000 passengers. Spirit Airlines follows with 1,99 pieces and Virgin America mishandled 2,34 pieces in 2017. 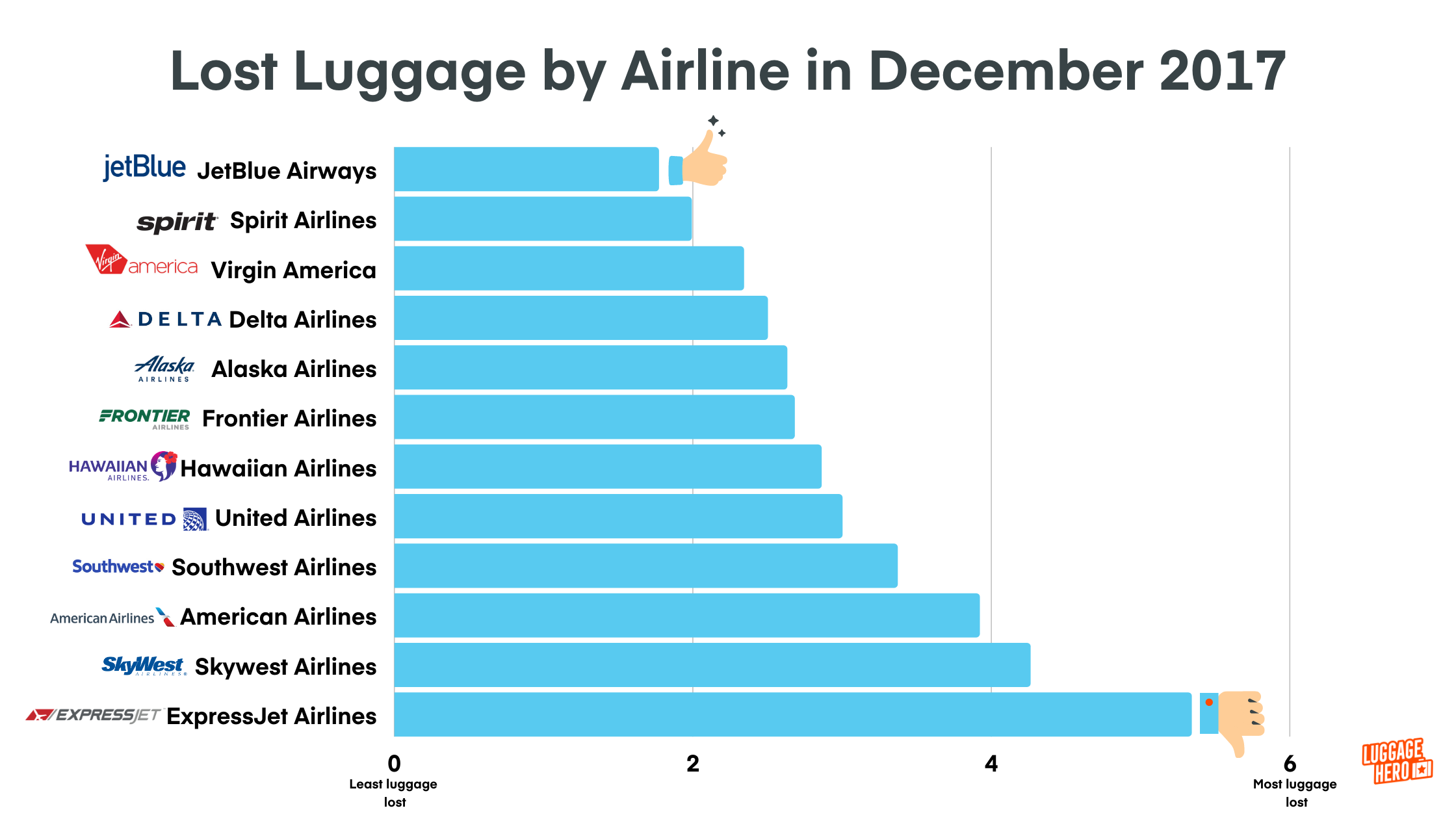 The data from December 2018 show these findings: 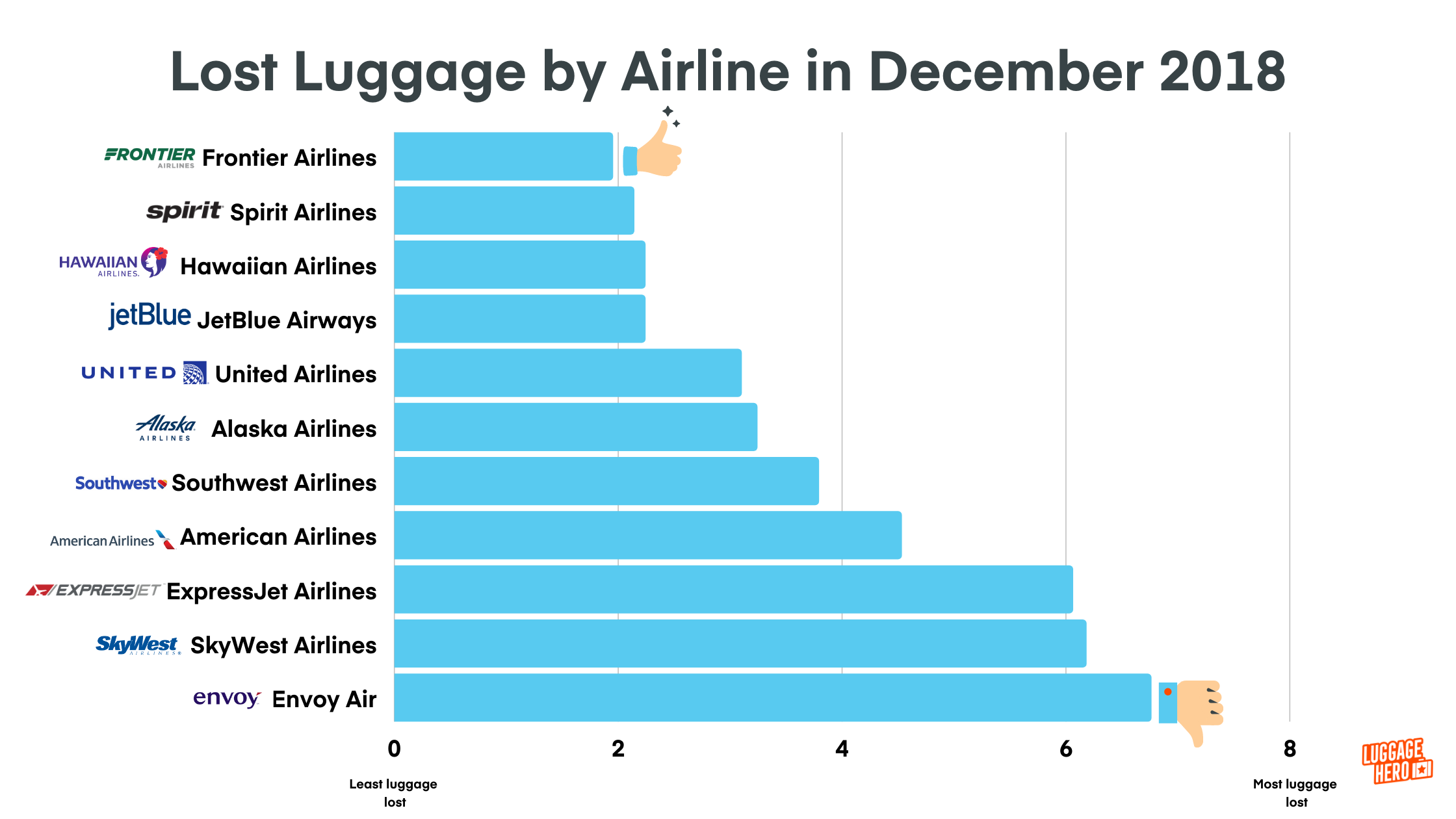 The data from December 2019 show these findings:

The data from December 2019 show these findings: Allegiant Air was the airline least likely to mishandle your luggage for December 2019. With the rate of only 1,84 pieces of luggage per 1000 passengers. Frontier Airlines follows with 4,42 pieces and Virgin America mishandled 4,53 pieces in 2019.

On the other hand, the airlines which were most likely to mishandle your luggage,  go as follows: Alaska Airlines mishandled 7,72 pieces of luggage per 1000 passengers in December 2019. SkyWest Airlines and United Airlines scored also quite high with 7,43 and 7,70 pieces per 1000 passengers respectively. 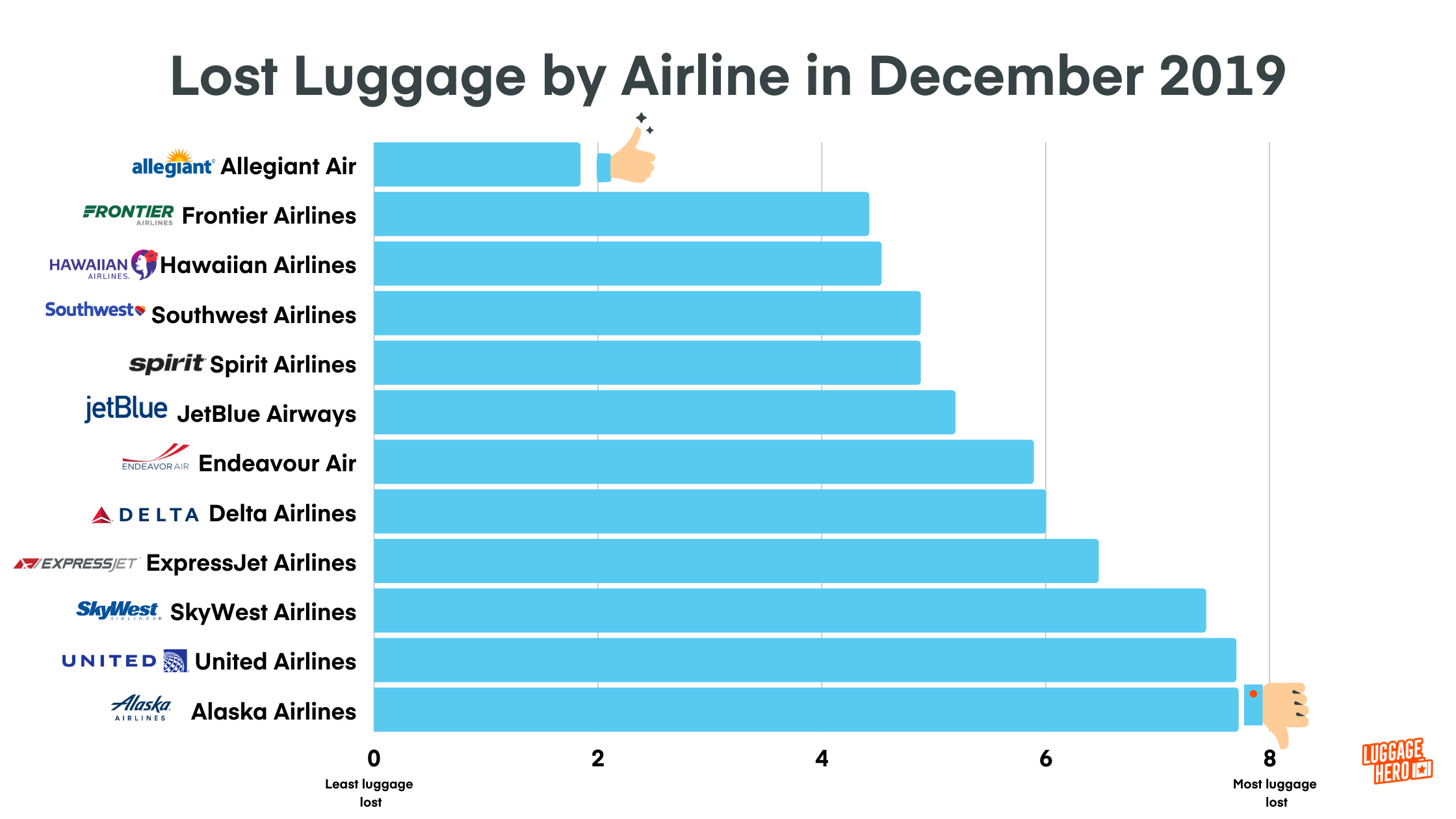 To sum it up, Frontier, Hawaiian, JetBlue, and Spirit Airlines have been ranked among the best airlines when it comes to the safety of your luggage in the past three years. We know, Christmas tends to be hectic and busy, especially at the airports, but with these statistics, you can get rid of at least one burden off your shoulders.

What to do when your luggage gets mishandled or lost

There is a big chance that if you are a frequent traveler, you will sooner or later experience an issue regarding your luggage. And if you do, don´t you lose your hope! Remember that airlines are responsible for any damage, mishandling, or loss that occurred while operating with your luggage and belongings.

The purpose of this article is also to list possible scenarios regarding your luggage and what to expect from it.

Your luggage is damaged

Sometimes, airlines operate with luggage rather rough. The whole process of collecting and loading luggage needs to be time-efficient and with the number of passengers traveling nowadays, the procedure may be rather hurried.

Therefore, there are chances, your luggage will get damaged. If this happens, know that the airline is responsible for reimbursement and repairment of your damaged luggage or/and its content, if the damage occurs, while your luggage is under the airline´s control during the flight or transportation.

If the occurred damage of your luggage or contents cannot be repaired, an airline will try to negotiate a value amount of your belongings as compensation.

Even though airlines usually do not compensate for the fair wear and tear of your luggage, they cannot exclude liability for damaged handles, wheels, or straps.

Note: There is a maximum limit until which an airline is liable. Furthermore, you should know that airlines are not liable for pre-existing damages of your luggage or contents, or if proven that your belongings were packed improperly.

Usually, airlines are not liable for fragile items, electronics, perishable items, cash, etc. You can usually find a list of items excluded from liabilities of an airline in their contract of carriage.

When traveling domestically, airlines do not have a liability to compensate their passengers for damaged items, which are excluded from the contract of carriage.

However, when traveling internationally, airlines are responsible for such items if they were accepted for transportation, even if these items were not informed about when checked-in.

Our tip: We recommend to buy additional travel insurance if traveling with valuable items. 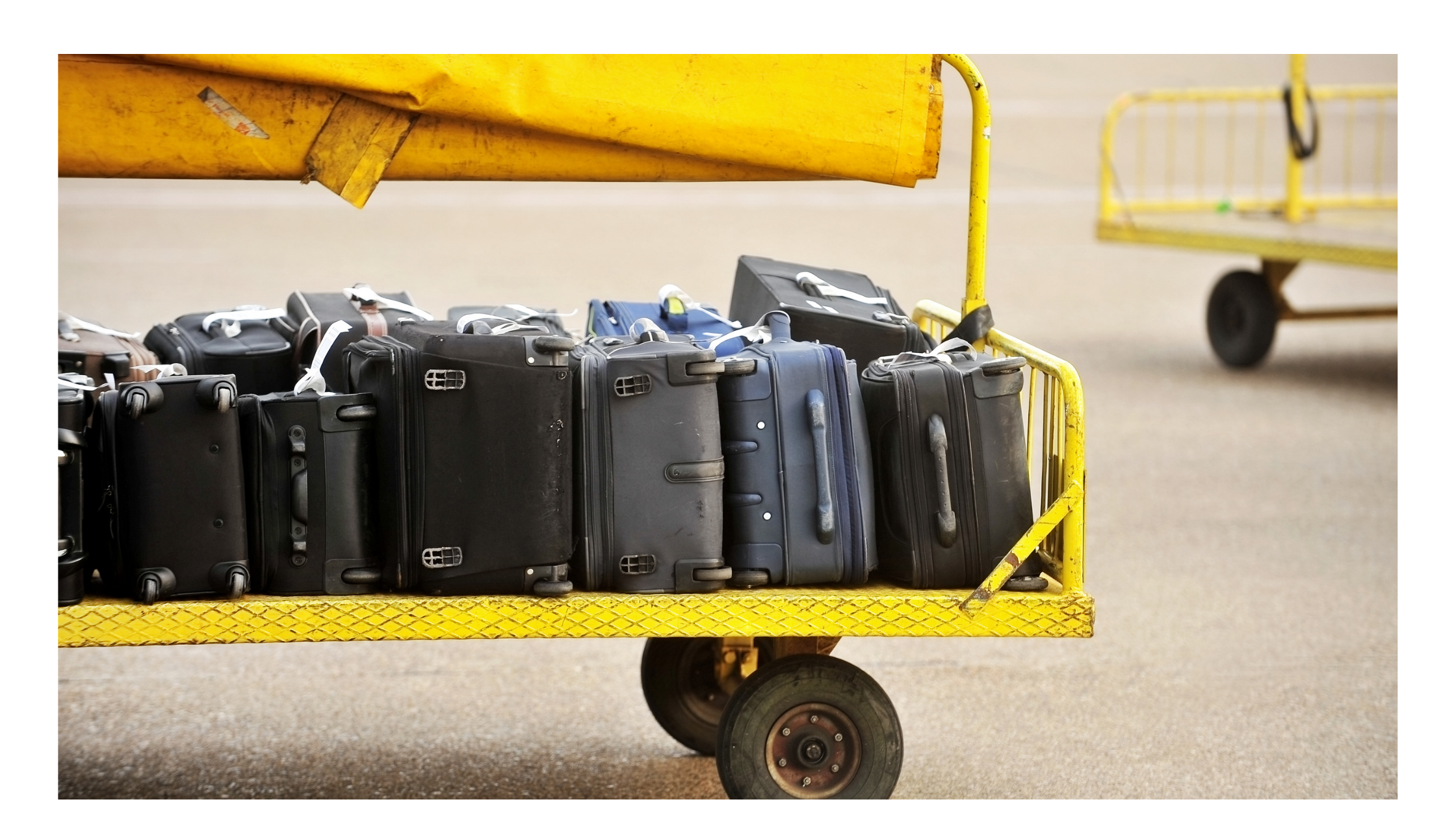 Your luggage is delayed

Sometimes, your luggage might travel with another flight than you or might be forgotten to be sent. If this happens, airlines are responsible for locating your luggage through their tracking systems and send it to your destination. Some airlines have developed an App that helps to track down and provide other information about your luggage.

You should also get informed about the responsibilities that an airline has if your luggage is delayed on their official webpage. These are, for example, to compensate travelers for all the incidental expenses that had encountered, due to their luggage being delayed. These expenses have to be verifiable and it is a subject to maximum liability limits.

Your luggage is lost

Different airlines have different policies and rules to determine whether or not your luggage is lost. However, most airlines will declare luggage being lost between 5 – 14 days after the flight, but this can vary from one airline to another.

It also depends on whether you travel domestically or internationally, whether you switched flights, whether you used different airlines, on the airline´s searching system, and other factors.

If an airline refuses to accept their mistake and that your luggage has been lost without a reason, the airline can become subject to enforcement by the authorities such as DOT (Department of Transportation).

So what is it that should airlines do when they lose your luggage? Once the airline determines and your luggage has been lost, they become responsible for the luggage and its contents and they have to compensate you. This is subject to depreciation and liability limits, though.

In general, airlines are also required to compensate for any incurred costs that you spent on your airline transporting your lost luggage. However, you will need to show the receipts of your valuables that were in your luggage or anything else that can be used as proof for airlines. 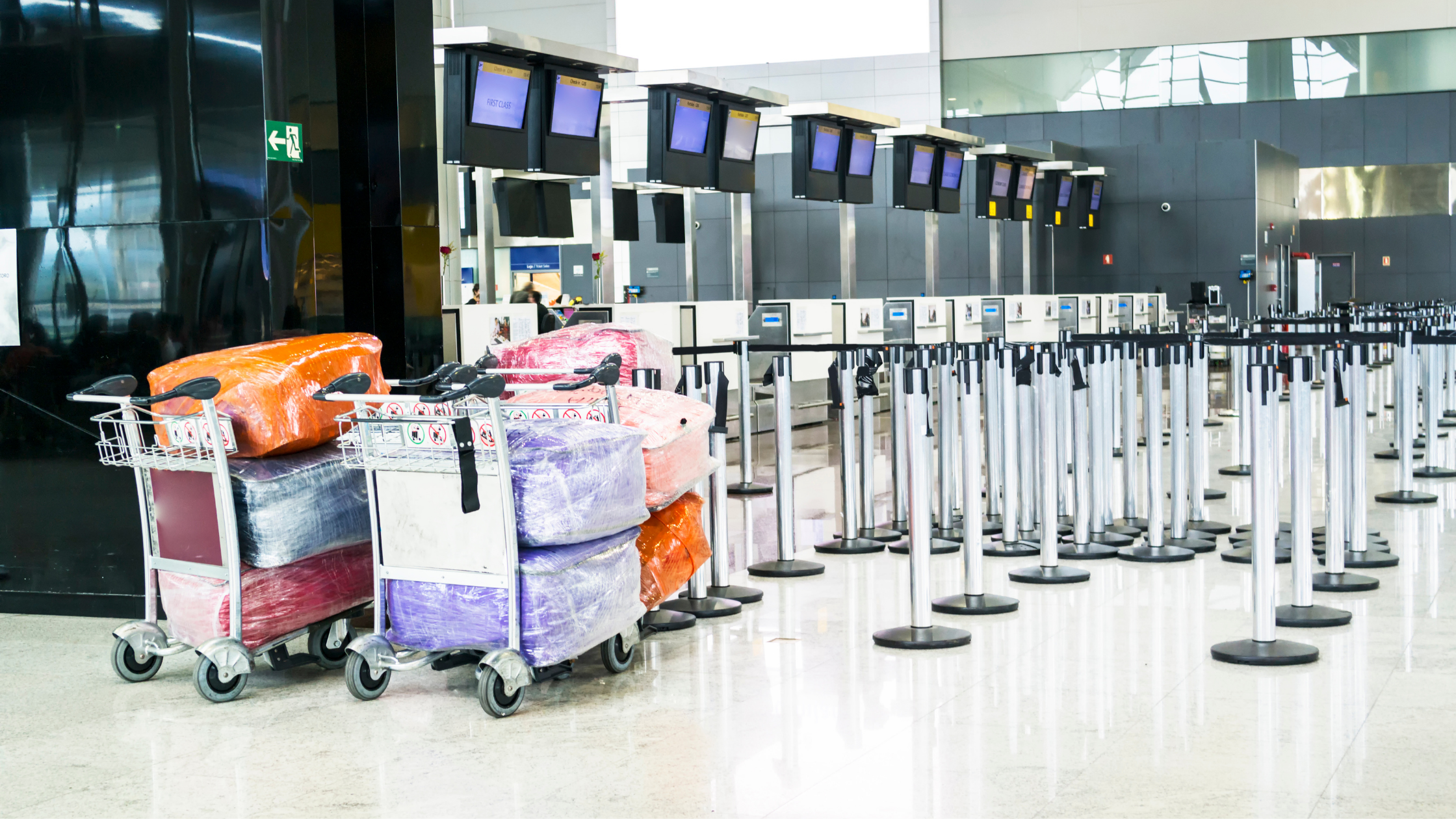 When traveling domestically, the current maximum liability amount is set to be 3500$ by a regulation. This amount is the most that airlines are required to pay to a passenger for damaged, delayed, or lost luggage. Airlines are allowed to pay more than the limit if they choose so, but it is not a requirement.

When traveling internationally, the maximum baggage liability is regulated by a treaty called the Montreal Convention. The maximum luggage liability for flights covered by the Montreal Convention is currently 1,288 Special Drawing Rights (approximately 1,780.00 $US).  This is the most that airlines have to compensate their passengers for damaged, delayed, or lost luggage. Airlines are allowed to pay more than the limit if they choose so, but it is not a requirement.

We hope you find this information useful. Should you be in need of luggage storage, don’t forget that you can store your luggage at LuggageHero and insure the safety of your belongings wherever you are!